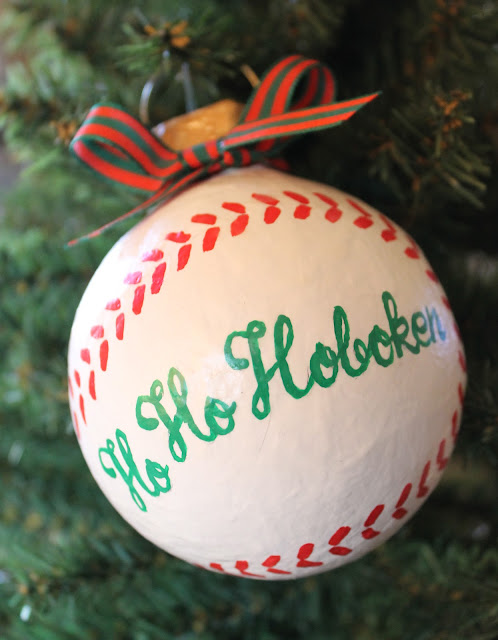 IN THE BEGINNING...
Let's start our journey to restore the Dino & Harry's Christmas tree where all this began many years ago... the Ho Ho Hoboken baseball ornament. Not only was it the first ornament I ever made for Dino's tree, it turned out to be everyone's favorite. (I know this because I've made multiple replacements over the years because somehow it used to mysteriously disappear off the tree before New Years!)

Now, the original inspiration came about when I was preparing for the Hoboken Arts & Music Festival. Susan and I were at Dino's talking about what might be popular at the show and landed on the idea of a Hoboken baseball ornament. A few glasses of wine later and we had added Ho and Ho to Hoboken and thought ourselves very clever indeed. 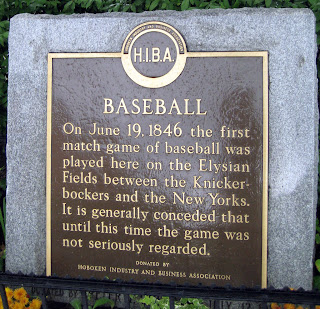 WHY BASEBALL?
Now you may or may not know this about Hoboken, but it is known for being the "home of baseball." Personally, I don't know much about baseball, but for the sake of bloggeristic integrity, I did look it up on Wikipedia, and it turns out there may well be several legitimate "homes" for baseball depending on how you look at it. According to the official wiki-story, Hoboken was the sight of the first game to be played "under modern rules" also known as the Knickerbocker rules. (What is a knickerbocker, by the way?) The game was played between the New York Knickerbockers and the "New York Nine" at Elysian Fields in Hoboken on June 19, 1846, and though they played by the Knickerbockers' rules, the "New York Nine" clobbered them 23-1.

So with a little Hoboken history under our belts, roll forward 100+ years and that's how the Ho Ho Hoboken baseball ornament came to be.

AMATEUR CRAFTER
If you follow along this year, you'll see that my posts are going to be about amateur crafting (and let me underscore amateur). I dabble in lots of different media, specializing in none (except maybe crochet). That said, I thought it would be fun to show you how I go about making the ornaments. Please forgive my sometimes-rudimentary techniques. And if you know a better or easier way, please, please, please let me know!

So here's our first new ornament for Dino's Tree 2.0.

1.   MAKE THE CAP
Cut a strip of medium weight cardboard (like a cardboard tube). You'll need it to be about 4" long and 1" wide.

Curl it into a little tube and tape it together to form the sides of the ornament cap.

Press it into the Styrofoam ball, leaving most of it sticking up. Try to do this on the first try so it's a firm fit, but don't worry if it doesn't feel perfectly secure. The paper mache will make it solid later.

2.   ADD THE WIRE
Bend the wire to fit inside the cap, leaving a nice arc sticking up out of it like a traditional ornament. Try not to dent it. It's really hard to get it smooth again. If that happens, I just cut another piece of wire and try again.

Hot glue the heck of the wire INSIDE the cap. Let it cool for a few minutes and give it a gentle tug to be sure it's in place. 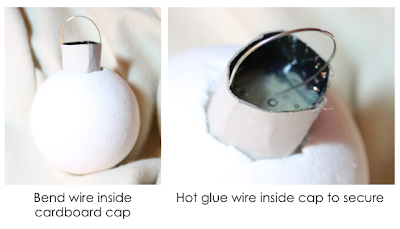 3.   TAP YOUR INNER KINDERGARTENER: IT'S PAPER MACHE TIME!
Mix up about 1/8 of a cup of flour with a little water to create a paste about the consistency of mustard.

Tear up the tissue or newspaper into small (approximately 1") bits. And, tear up about 20 long-skinny strips (about 5" long) to fit through the wire arc you just created on the cap.

Using a paint brush, slather on some paste and apply the paper bits one at a time, painting all over the paper so that it's wet and starts to get smushy. Add one paper bit at a time so that each piece gets soaked through. Try to make even layers all over the ornament.

For the cap, layer the long, skinny strips over the top (but under the wire) one at a time at slightly different angles so that you cover the whole cap, leaving only the wires peeking up through when you're done. Fold the long strips down over the sides of the cap and onto the ball. There will probably be a little wrinkling, but don't worry too much. I think that gives it a more home-made look. 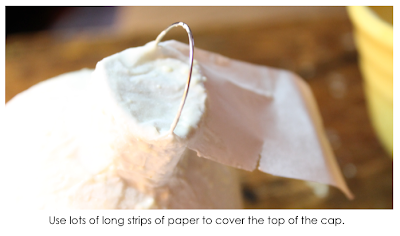 Oh, and don't worry if you get some paste on the wire. It flakes right when it's dry. 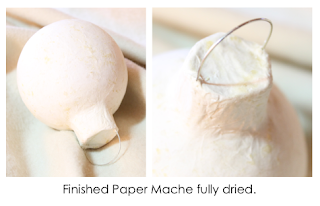 4.   PAINTING TIME
Once it's fully dry (and yes, you can use a hairdryer if you're in that much of a hurry), if you've got a lot of wrinkles you don't like, you can sand it down a bit (but not all the way back to the Styrofoam or you'll have to add more paper bits).

Paint the whole piece white. (I actually prime it then paint it. If you want to take that extra step feel free, but it's really not critical.)

5.   MAKE A BASEBALL
Download and print out this pattern to size.

Hold it over the ball and trace the pattern lightly to mimic the seams on the baseball.

Paint the Herringbone-style laces along the seam line with red paint or an indelible red marker. (And be sure it's indelible because we're going to shellac this later.)

I usually wind up going back over the pencil line with more white paint, but that's up to you. If you like the look of the seams, keep them. 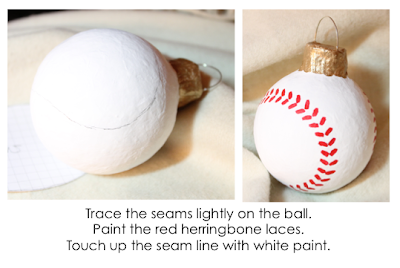 6.   ADD YOUR NAME
Now, if you're ready for a seven-inning stretch, you can stop right there and shellac your finished ornament. Or if you want to personalize it, use green paint or an indelible marker to add your name. I used a font called "Brannboll" which is free for personal use from dafont.com. 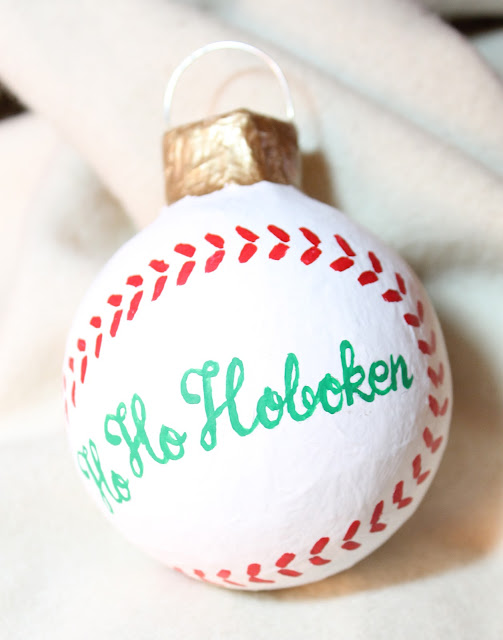 7.   SHELLAC IT!
Coat the entire ornament with shellac to add an overall finished gloss.

8.   ADD A RIBBON
I use a few dots of hot glue around the cap seam to secure the ribbon in place.

So that's it. If you have any questions, let me know by leaving a comment here. And be sure to let me know how you make out with your project.

Posted by Cheryl McCarthy at 6:01 AM 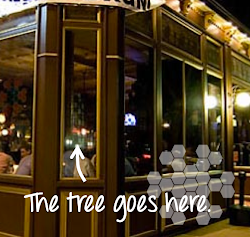 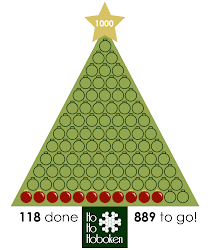 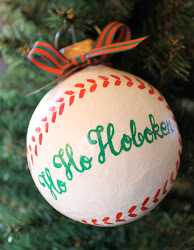 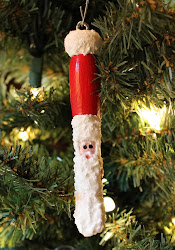 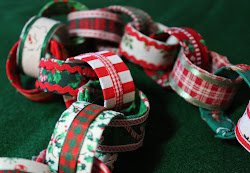 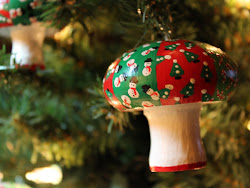